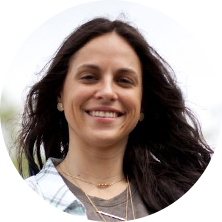 Megan’s periodic nausea, headaches, and nerve pain began when she was a teenager. Learn how she finally got an accurate AIP diagnosis and advice on how to manage her symptoms, allowing her to volunteer in Romania! 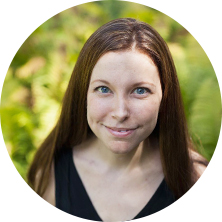 Learn how Ariel’s persistence took her from surgery for a broken nose, to vomiting, pain, and dangerously high blood pressure, to five misdiagnoses, and finally to a correct diagnosis of AIP. 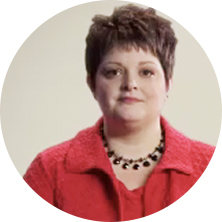 Amy had painful and disabling symptoms, including abdominal pain, nausea, constipation, and anxiety, for 20 years. Learn how she got in touch with the American Porphyria Foundation and got a referral to a doctor who diagnosed her AIP.

Watch Amy's Story
Disclaimer: Although these are actual stories from people living with AIP, each person’s experience may be different.
Find the right doctor

Megan: Life as an adventure

Megan is passionate about life. She seeks out opportunities for adventure (the more unusual, the better!) and helping others. Both are sometimes challenging for her because she has acute intermittent porphyria, or AIP. Yet despite enduring the painful symptoms of this rare inherited disorder, Megan refuses to let AIP take over her life. “I try to live life to its fullest,” she says.

AIP is caused by an enzyme deficiency that results in the overproduction and buildup of porphyrins in the liver. Symptoms of AIP often include severe abdominal pain, vomiting, rapid heart rate, and pain in the limbs. Because these symptoms are common to many other diseases, AIP can be challenging to diagnose.

The long road to a diagnosis

As a teenager, Megan often experienced nausea, headaches, and nerve pain in her hands. She saw many doctors over many years before a specialist finally provided an accurate diagnosis. She learned that her disease was serious: some people with AIP require hospitalization for severe and painful attacks, and the disease may cause irreversible nerve damage if left untreated.

Megan’s response to her diagnosis? Go to Romania! Determined to help people in need, Megan volunteered in Romania for six months with a non-profit organization. “I threw myself into a country where I didn’t know anyone,” she recalls. Megan learned a new language, adapted to a new culture, and built lasting friendships.

In Romania Megan closely followed her doctor’s advice on managing symptoms of AIP through diet and exercise. All was well—for a while.

A month after returning from Romania, Megan had a severe AIP attack that caused her to be hospitalized for more than two months. “I lost feeling in my hands and feet, experienced hallucinations, and became non-communicative,” she recalls.

This scary episode of AIP was a wake-up call for Megan. As she recovered, she learned more about her disease, and she talked to her doctor about how to manage her symptoms and what treatments were available if she had another acute AIP attack. She vowed that AIP would not define her and decided to focus on the important things in her life: her family, her friends, and her puppy, Coal.

Onward and upward for Megan!

Today Megan connects with others in the AIP community and participates in a Shadow Ride to help raise awareness of the disease. She understands the challenges of managing AIP, but her appetite for adventure is stronger than ever. She recently set a goal of hiking the Appalachian Trail from start to finish with a friend, and she trains by climbing the trails near her Arkansas home. “I’m going to do it,” she says. “It’s going to happen.”

Ariel: Facing the world head on

Ariel has always taken the staircase of life two steps at a time. A highly motivated young woman, Ariel completed both high school and college in only six years. She reached even higher, graduating from law school, building a renewable energy practice with an energy consulting company, and starting a family. Ariel’s star continued to rise, and she felt good about making a difference in the world. But then, a few weeks after turning 30, “I literally tripped over my own feet and broke my nose in front of a conference room full of people,” she says. And that changed everything. Though she didn’t know it then, this moment was the beginning of her new life, one in which she would face her biggest challenge yet: battling a rare genetic disease.

Ariel’s broken nose required surgery to rebuild her shattered septum. The surgery went well, but a week after returning home from the hospital, Ariel spiked a fever and developed stomach pain that quickly got worse. “At one point I tried to stand up, but the pain was so overwhelming that I passed out,” she says. Fortunately, her husband found her on the floor and took her to the ER. Initially the doctors thought she had developed either a post-operative infection or a complication related to the anesthesia. She was discharged, yet she returned to the ER several times where she was finally admitted and spent a week vomiting and in terrible pain. She eventually got better and was sent home, believing she simply had difficulty recovering from her surgery.

However, the pain and vomiting returned six weeks later, this time with a rapid heart rate, dangerously high blood pressure, and hallucinations. By the third hospitalization in as many months, it was clear that something was terribly wrong.

After being run through the gauntlet of several medications, a dozen specialists (including a psychiatric consult), five misdiagnoses, and dozens of tests, Ariel found a gastroenterologist at a larger hospital who not only believed her symptoms were real, but also vowed to figure out what was causing them. During Ariel’s next bout of symptoms, the doctor conducted many tests, scans, and diagnostic procedures. After ruling out more common conditions, the doctor began testing for rare diseases. At last came a definitive diagnosis: porphyria, later confirmed by genetic testing as Acute Intermittent Porphyria (AIP).

“The whole time I was sick, the surgeon who fixed my nose kept saying, ‘When you hear hoof beats, you look for horses, you don’t look for zebras,’” Ariel recalls. “After getting diagnosed with AIP, he said, ‘I can’t believe it. It was a zebra all along.’” It took the support of her family and a medical team willing to think outside the box to find the zebra—the very rare disorder AIP—and to provide the help and care Ariel needed.

Making the world a better place—two steps at a time

Since being diagnosed, Ariel now has peace of mind knowing what’s happening in her body and working toward improving her health. Although managing AIP can be challenging, she’s finding success by developing and following a care plan that works for her busy life. Her can-do attitude never left, and she’s tackling challenges, working full-time to develop renewable energy solutions to make the world a better place—not only for her daughters, but for everyone.

“I want to make a difference and have a positive impact on the world,” she says. “I don’t want this disease to define or limit me.” Ariel is sharing her AIP story to help encourage others to keep searching for answers, options, and an accurate diagnosis.

You are leaving IS IT AIP

By selecting OK, you are leaving IS IT AIP. This external link is provided for your convenience. Please note that external links or websites are not controlled by Recordati Rare Diseases Inc., and thus are not subject to our Privacy Policy and Terms of Use.

Thank you for visiting our site. We hope your visit was enjoyable and informative.